by Millymollymandy
OK guys time to take some photos of things starting to appear in your garden and report on when your first daffodil opens! Later on we'll do the Ish First Swallow Sightings as usual.

I have a little narcissus unfurling slowly but it's a Tete a Tete and they are earlier than the others.

We've been listening to the Song Thrush singing for days now and it's all coming alive in the garden. Some of you will have seen these photos already on facebook but come on and post some photos and let's banish the winter blues!

By the way my garden is very ahead this year - have had a strange winter of cold interspersed with unseasonally mild weather.

Hellebore (have lots of others just starting to flower)

Daffies in bud and Euphorbia martinii

Since I took this photo 4 days ago there's a pink flower out on the white lamium!

My violets are flowering and pulmonarias just starting now too.

by Zech
Today I have snowdrops just opening: 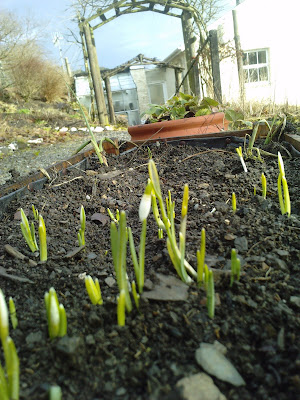 crocuses just peeping above the surface: 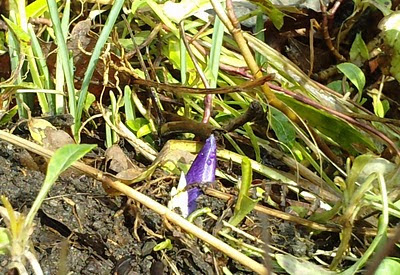 and tiny pink buds of rhubarb (not a standard springwatch flower, I know, but I was excited to see it, especially as I didn't know I had any rhubarb): 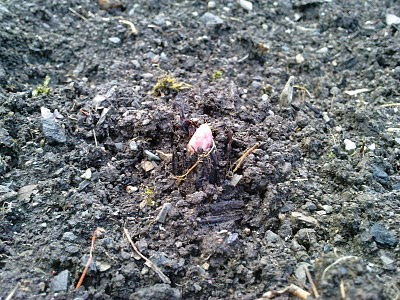 by Odsox
There you go, a bit beaten about by the strong winds and heavy rain we had last night.

And my double Lent Lilies about to burst open a wee bit early.

by wulf
These daffodils have been up for a few days now: No idea what kind they are though - a pleasant surprise after buying the house last summer. Lots of other things are breaking through, too, and most of the trees and shrubs are beginning to show buds: Hurrah for spring! (and fingers crossed that we won't get another blast of icy, snowy winter).

by Millymollymandy
Lovely, I do adore daffodils! Keep 'em coming.

by Mrs Moustoir
We've had our first sunny afternoon in ages. Lovely to see the sun after so much rain.

Saw the first Brimstone butterfly of the year today and a HUGE bumblebee that sounded like a low flying aircraft.

On the flower front - first daffs starting to open (tete-a-tete in tubs) and crocus in the grass.

by The Riff-Raff Element
My garlic is away! I'll try and get a photo.

by boboff
not sure on photos, resized them to 150 pixels but not sure!!! Thats what the guidelines say but it looks tiny.

Anyway, mating Herons & a Bee on some snowdrops!

You can just see the wild garlic coming through
wildgarlic.jpg (230.15 KiB) Viewed 2876 times

by Odsox
I resize mine to 640 x 480
That's what my pics further up are sized and that looks about right.

SusieGee wrote:: The second photo is a woody shrub I don't know the name of, it's really strange to see lovely pink flowers when there are no leaves yet.

Thats a viburnum, Susie Gee, ours is fantastic this year and it smells really fragrant. Started blossoming lateNovember and now in full bloom. Got bulbs coming but no daffodils yet! Must be the sea air!

by Jacqui S
Thanks battybird, I was just wondering what that shrub was as we have one and it really does smell wonderful, I stop to sniff it every time I walk past!

by battybird
Ooh...just noticed some tet a tet out in our garden! Had not noticed them till now, just a small clump partly hidden by the winter jasmine! Thanks for making me look properly MMM!! What is it they say about taking the time to smell the flowers??

by Odsox
I love spring.

by boboff
Thats lush that is!

by crowsashes
i thought i was going mad earlier ... just spotted a ladybird in the grass when hanging the washing out and my first butterfly of the year - the cabbage white. now im no expert but isnt it a bit early?

also have the bluebells poking there leaves up, the first primrose flowers. daffodils in bloom and my dog rose has kicked off already producing new leaves

crocus' in flower too .

the box hedge has gone mental and is also throwing off a lot of new growth... im going to HATE cutting that in a month or 2 ....