by JustinFun
Should I be worried, or celebrating?

Yesterday I was digging over a patch of uncultivated land for a potato bed in our allotment (recently taken on and unused for several years). I moved a clump of grass and underneath was what looked at first like a patch of very sandy soil (we have fairly heavy clay). When I looked more closely it was clear that they were millions of tiny orange eggs - each one about the size of a grain of sand. What took me aback was how many of them, the clump must have been at least six inches across and 2-3 inches deep of solid eggs.

What could produce this many eggs (surely it must be big

, but then the eggs are so small!). There was no sign of any live insect activity around the eggs.

We live in Kent, and the area was mostly brambles and couch grass before I got my fork out.

What I really want to know is, should I be reaching for the boiling kettle or carefully moving the eggs to a safe sheltered place?
by Thurston Garden
No idea that they will be, but I am a murderer and would be tempted to get rid unless any other kinder soul can tell what they are!

Can you post a photo?
by tim&fatima
no idea either, but I would be intrigued. can't you re-house some of the eggs. in a confined space nearby and see wot pops up.
by MKG
Given that number and mass of eggs, I thought ANTS at first - but orange? No, those would be white. Then I remembered - there's a slime mould (called insect egg slime, if I remember correctly) which is orange. Could it be that?
by JustinFun
It could be! We had some interesting jelly fungi in there in the autumn. Mind you, a quick google doesn't show anything quite right. I'll see if I can get a photo this evening.
by grahoom

That's not right - they're smaller, perfectly spherical and slightly translucent. They really do look like eggs - a bit like a smaller version of fish roe, only relatively dry.
by MKG
That's slime mould out, then. It definitely looks like jam-jar time. Unless, of course, your garden is extremely!!! wet, and they really are fish eggs.
by grahoom
possibly, - just possibly - they could be snail eggs???

when looking online for pictures, most of the snail (or slug eggs) where white - but i did find this link 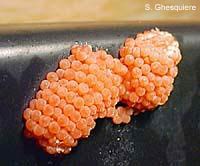 by JustinFun
Well, I went back out this evening, and found some more in my prospective potato bed! If these are a nasty I think I'm going to have to move...

Anyway, here's some pictures. To give you an idea of the size of these things, the dead stems you can see are grass stems: 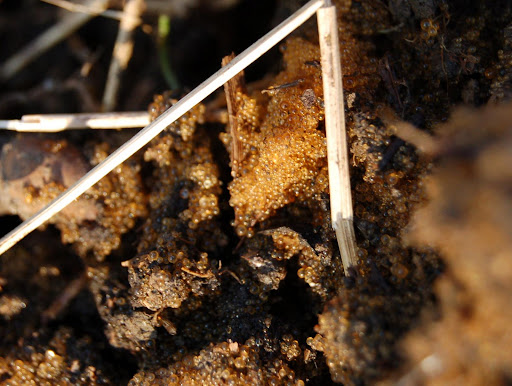 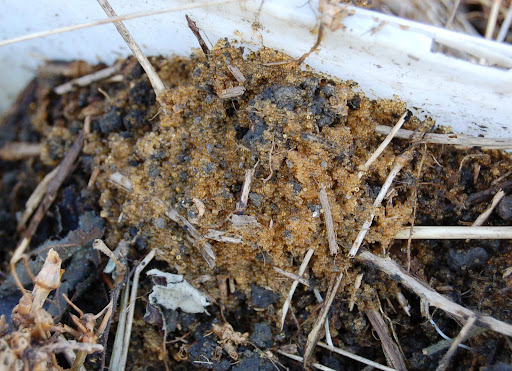 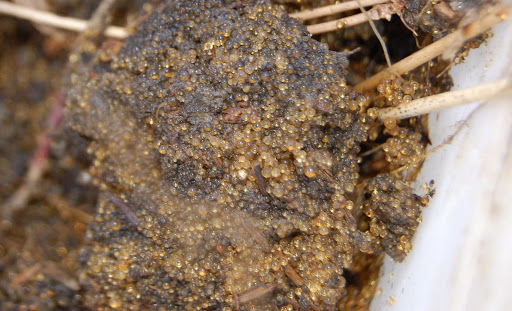 If these embedded images don't work, here's a link (and can you please tell me if they don't work - not sure if it's possible to directly link to picassa):

So... any ideas?
by Sky
I can't see your photos but followed the link.

They're fascinating whatever they are. My first thought was snails eggs too but it was just a guess.
by Thurston Garden
Slug/snail too, but the experts will be along presently

by grahoom
i think they might well be snail or slug eggs. if you have loads of snails - you could always eat them....
by JustinFun

grahoom wrote:i think they might well be snail or slug eggs. if you have loads of snails - you could always eat them....

But they were all clumped together in a huge bunch (across a large area)! I didn't think slugs or snails would lay eggs like that - it would need to be tens or more of slugs all laying in exactly the same place. I'm now feeling very nervous...
by MKG
Seen your photos. They LOOK like slug/snail eggs, but I can't find any species which lays its eggs in masses like that. They also look like earthworm eggs, but those you'd expect find only in bundles of 20 or so. Having said that on the one hand, on the other it does not look like an egg mass because the "Eggs" apparently are of all different sizes. If they were eggs, you'd expect them all to be at exactly the same developmental stage and therefore the same size.

At the moment, I'm flummoxed, but I'll keep looking. Don't get too nervous - the man-eating snail hasn't been discovered yet.

EDIT: Having looked again, I'm not ready to totally discount slime moulds yet.

EDIT3: And I'm now satisfied that they aren't insect eggs at all. Only colonial insects could produce such a mass, and these things are the wrong shape for ants, wasps or bees of any description. We're back to fungi/slime moulds. I can't find any such thing which looks precisely like what you have, but there could be a million reasons for that. However, although I now think it IS a slime mould, I'm ready to stand corrected if it "hatches". What you're NOT going to get is a sudden eruption of any known garden pest.

EDIT4: And I just re-read one of your earlier posts. I suspect that you might be able to watch this stuff turn into that jelly fungus you mentioned.
All times are UTC
Page 1 of 3