by Green Aura
Our polytunnel was out of action last year as the cover ripped badly in the wind and eventually blew off.

Thanks to veggieman's inspiration we've recovered it with something (hopefully) more substantial. It cost a bloody fortune but should last us 20 years, if all goes to plan

We still need to erect a windbreak to give it extra protection but we'll hopefully get some tomatoes this year. by Odsox
Wow that looks the bees knees Maggie, you must be proud of that and itching to get in there and plant it up.
I will have to try even harder to get my veggies looking good as I have some impressive competition now.

by Green Aura
I'm hoping it'll be a lot stronger than a Keder house HW! It's covered with twinwall polycarbonate and we built all the wooden support structure, onto the existing galvanised 35mm hoops, which are buried 18".

If this thing shifts I'm packing in gardening! For good.

by Christian
It looks amazing and will probably heat up quicker than plastic sheeting!
Well done!

by oldjerry
For what it's worth Maggie,I've done quite alot of stuff on windbreaking.In truth there's probably book in it.Tell me if you're interested.

by Green Aura
Any advice would be appreciated OJ.

by oldjerry
I 've been lookingfor this thing I wrote 12yrs ago,but it could be packed up anywhere,but a few bits from memory,and please excuse me if I start with the bleedin'obvious..

You want to BREAK the wind not stop it ,so a solid barrier is worse than useless(eddies etc).We did a lot of work concerning the height\ effective distance etc and we found that about 4-5X was the optimum obviously the top should not be level if possible.
So if the top of your tunnel is say 10ft high,your windbreak would want to be about the same height and 30ft or so from the tunnel.

The black plastic stuff from horticultural wholesalers has a life on a serious coastal site of 5-8 years,so plenty of time to grow a decent wind break behind.Here,adjust as necessary:
Outside of windbreak always Tamarisk (much hardier than you think,and as you know coastal we shouldn't be talking massive frosts.
Next layer,Sea Buckthorn (Hippophae Rhamnoides)closely interplanted with the unusual but very effective Olearia Traversii.
Inner layer,Eleagnus Ebbingei or even Common Privet or Blackthorn.
I've planted this mix(the inner planting can be adjusted if want) in a few VERY exposed positions and it's been OK.

Hope this is of use to someone..BW

Well done. It's a bit neater than ours: 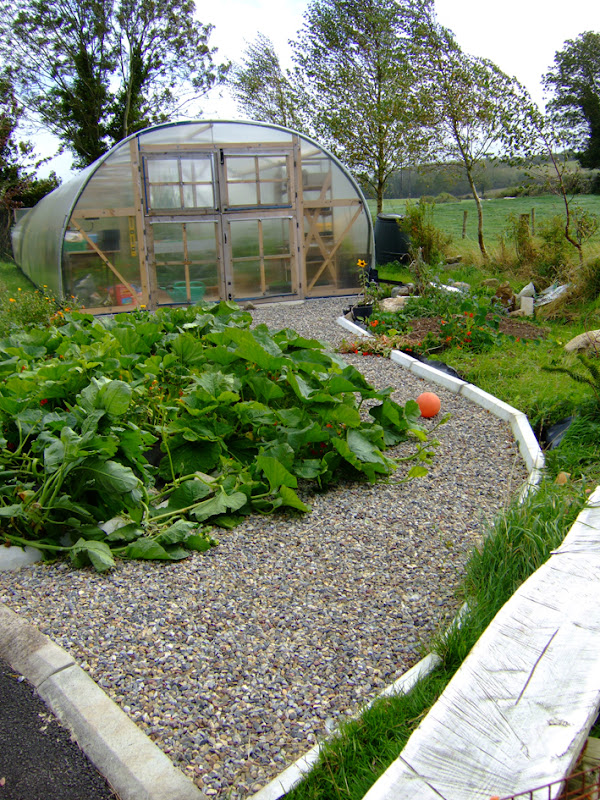 One problem is insects (earwigs, slugs etc) crawling into the 'tubes' in the polycarbonate.

We're growing willow as a windbreak for it.

Here's the inside last year, with the toms: 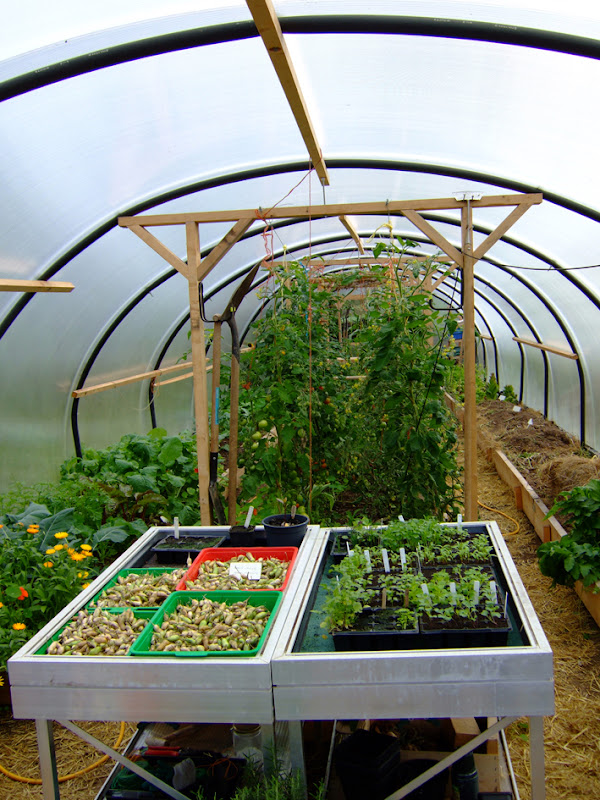 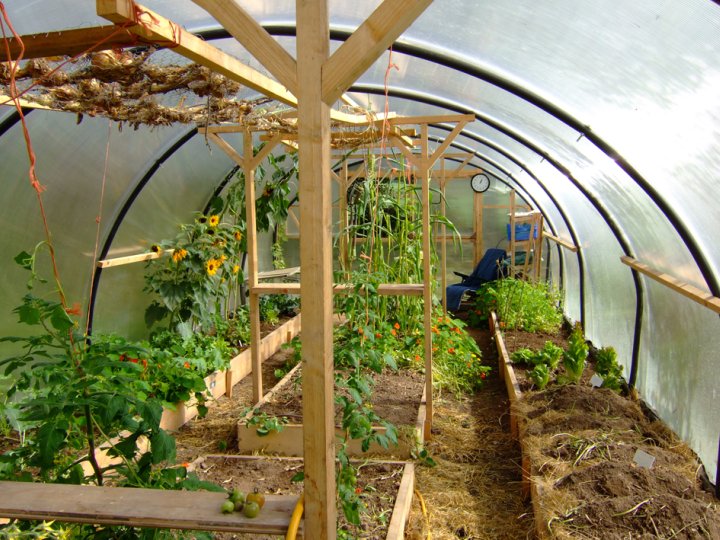 by Green Aura
Fabulous - I'm jealous at the size, we only had room for a 10'x15'. I'll post pics of the interior when it's finished. We replaced the solar panel (5W) on the heat sink, which got damaged by the wind, and the tunnel is now warming up nicely.

Thanks for the windbreak advice, OJ, we were thinking along similar lines. It's sometimes difficult to work out where the wind is coming from. The prevailing wind is South-Westerly but it seems to blow past our house (SW facing) and then whip back in from the loch. Unfortunately we have 12' wide gates on the loch side so no chance of blocking that

by oldjerry
Well one place I did on a headland near the Lizard we did have to plant on both both sides,but it worked so well Agaves grew there outside.Your gates sound like a pain,maybe a short but permanent fence of the black plastic set nearer the tunnel equivalent to the gate width. (the plastic doesn't give you shading probs like a growing windbreak).

by Potter's Farm
OMG....jealous!!! We have a polytunnel, nowhere near as big. Been given a greenhouse frame which we will cover in twin wall polycarb so I can move all the seedlings out of the tunnel, its impossible to walk in there at the moment.

When we bought the poly tunnel my hubby said to get a bigger one but I felt guilty spending so much money in something that was primarily for me, wish I'd listened to him now!!!
All times are UTC
Page 1 of 2