by tosca
We have recently (end of May) moved out to Bulgaria and hope to become near self-sufficient within the next couple of years. Not long after we arrived we were given five half grown chickens as a 'Welcome to Bulgaria' present, and they have been joined recently by a trio of rare Bulgarian Shumen chickens, which are a project for my husband. He had originally wanted silver laced wyandottes and we bought hatching eggs out with us, but a series of thunder storms...and they were mega storms...meant that the electricity was turned off in the village on several occasions to minimise damage, and we lost all eggs at various stages of developement.

But we move on, and I was given my five young girls, just a backyard mix, but with three legbar crosses, a silver sussex look-alike with a gammy foot and a black rock look-alike. They have grown to be a lovely bunch and look really well, though not laying yet. The Shumens were a sorry looking bunch, the hens being rather bald and the cockerel missing his tail due to fighting. The hens had been with another, black rooster and all eggs we are getting from the two girls for a couple of weeks are going into the incubator as the offspring will be un-related to our blue boy, Sevi, so any hen chicks can be retained.

Sorry, no photos till I have worked out the new photobucket. I've been off-line a while and everything has changed...bah!

by tosca
This is Sevi, our Bulgarian Shumen Cockerel. They are a rare breed recently brought back from the brink of extinction. He has two Shumen hens as well as my five. When we get enough hens for him we will separate mine out.

With his (hot) girls at bed time

He likes his big girls

One of four Shumen chicks

The dog is fascinated

All the girls are laying now, 19 August was the first day all seven laid 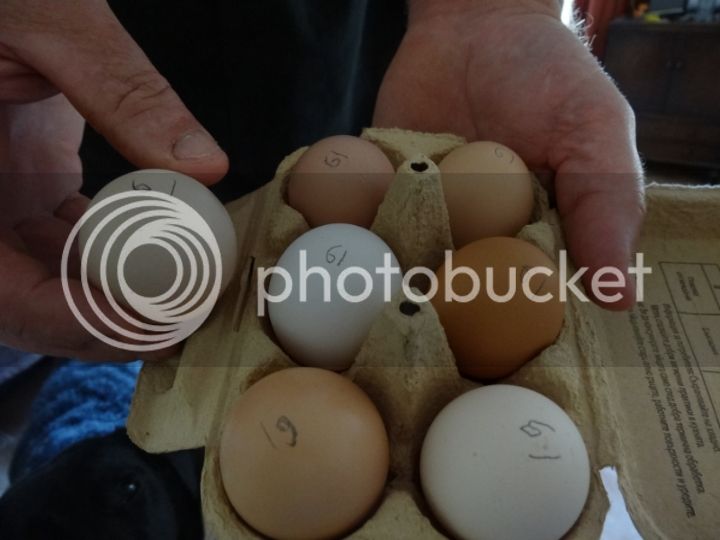 by 123sologne
Whoa, what a great bunch!
And what a superb photo of Sevi's face. He looks like a super serious proud cockerel.

I hope the little ones will become great birds too.

by tosca
Thank you, and yes, Sevi is very full of himself, but he had a fight with another cockerel just before we got him and his tail has not yet recovered. He doesn't know that though, and believes himself irresistible, which he is of course.

He is very nice, but only nine months old so very...er...attentive.

by tosca
Thanks Okra, if you have read that then you will know we now have eighteen chickens of various ages. They have been really interesting to have, but losing Bunty was sad, I miss the little white hen. We are hopeful that our surplus chickens are spoken for now, but until winter is over, which can be really harsh but usually short, we won't know how well they will do.

I have to say though, they have not been cheap to rear, but hopefully we have learned loads and next year we will have more idea.

daliu wrote:You need more of the statements in this matter, so that we can understand. Thank you for sharing. I hope you happy

Very happy thank you Daliu. There are sad times of course, for example we have lost two hens in one week and one a while ago, all from different causes, one shumen and two of the original hens. All the young cockerels found new homes as well as two hens and I have added two shumen hens to my remaining two layers for white eggs and the breeding shumens, Sevi and four girls, have a new pen and house. There are 16 shumen eggs in the incubator along with a dozen Polands (only 9 seem fertile) and a dozen araucana for blue eggs. We have three copper maran chicks and three ex-battery hens.

So we are in for a busy time with chickens, but hopefully we will find homes for any excess before winter this year as next winter is not likely to be as mild as this one and they will eat a lot!

by diggernotdreamer
Sorry Tosca, that was a spammer

Ah well, update done anyway. Too trusting me, and I get a few Bulgarians and Romanians ask questions after reading the blog so strange grammar is not unusual.

And there was me thinking I was popular!

by diggernotdreamer
what can I say, I was here, looking around and noticed some housework not done